Bottom left: my breakdown on the plane; bottom right: my four laparoscopic incisions; top: saying positive with the help of Amaretto 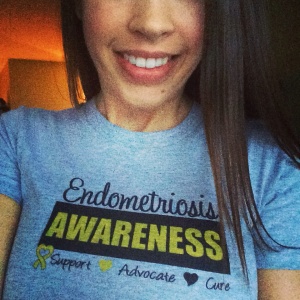 My Endo Awareness shirt arrived just in time for my trip to Ottawa for surgery!

Since returning home from my cystectomy/excision of endometriosis via laparoscopy in Ottawa, I wasn’t feeling quite as bad as I expected. I was just very tired, a bit sore and bloated from the air they pump into your pelvic region to perform the procedure. Although the surgery went very well for the most part, I received some sad news that was confirmed by the doctor when I spoke to him last week: I lost my left ovary.

Interestingly though, the doctor explained that when he went in, my endometrioma cyst, Fallopian tube, and what was left of my ovary was adhered to the the muscle wall of my abdomen. He believes that the ovary must have been taken during my inguinal hernia repair surgery 13 years ago that involved my ovary slipping through the muscle wall. I was never informed that the ovary was even damaged, let alone removed, at the time. My doctor said he cleaned up the “mess” that was left, and believes that’s what was causing the majority of my pain. He removed some endometrial tissue he found at the back of my cervix, but said I did not appear to have advanced disease, which was good news. He also checked my right ovary an tested the Fallopian tube, advising me that both looked healthy, and that conceiving shouldn’t be an issue for me.

Although the loss of the ovary apparently happened many years ago, it was still somewhat devastating news to receive. I had a little breakdown (above) on the flight home when I had two adorable babies sitting in front of me but after hearing many women tell me they’ve gone on to have multiple children with one ovary, I’m feeling better about it and I will cross that bridge when I come to it. That’s why we have two, right? 😊

My 4 incisions (above) are healing up and although they still hurt, they feel a little better each day. I am still exhausted as my body works to get better, and there are good days and not-so-good days, but overall I’m doing it well. I definitely have a newfound respect for women who have delivered and/or had a C-section – I was not very mobile and enough pain to be prescribed some heavy narcotics, and I didn’t have a human come out of me!

Anyways, I just wanted to give an update to go along with the awareness and education part of my advocacy, and since I’ve had so much support from everyone – thanks again, it is and has been much appreciated! When the pain from the surgery subsides and I have healed more, I will have a better idea if the surgery was successful in resolving my pain and other symptoms, and will update accordingly! For now, I’m keeping a positive attitude with the help of Amaretto!

One thought on “Post-Surgery Update!”